To kick off my challenge of cooking through the Modernist Cuisine at Home and also trying my hand at producing a cooking video I’ve decided to keep it simple.  The writers of Modernist Cuisine at Home developed some really great uses for the pressure cooker.  They realized that it was a kitchen device far too underutilized with home cooks, and chose to dedicate a lot of space in the book discussing different uses and techniques for the pressure cooker.  Besides saving cooks time when braising tough cuts of meat, the pressure cooker can be used to speed up browning vegetables and developing intense flavors in stocks and purees.  In this case the chef authors are using the advantages of the pressure cooker to quickly produce an intensely flavored confit of garlic in a relative short period of time.  The garlic produced in this video is very rich in flavor and spreadably soft in texture, almost like a butter.  The olive oil has wonderful garlic flavor and aromas, and can be reused on such things as salads, finishing dishes or to cook things with in hot pans. Take a look at our video and let us know what you think, as our foray into the writings of the Modernist Cuisine at Home begins. Stay Hungry Y’all!

As we’ve noted before, ’tis the season for the farmer’s market.  It just feels right to get up Saturday morning and go buy fresh fruits and veggies from real people.  Problem is, sometimes I get carried away and buy a bit too much.  The tomatoes/peaches/cucumbers/etc are just too good to pass up when in season, and there’s only twenty one meals in a week.  The question naturally presents itself…..What am I gonna do with the twenty {insert produce here} I just came home with?   Answer- Invite a bunch of Hungry Southerner’s over to your house for a party…….or…..do a bit of canning, pickling, and preserving.

END_OF_DOCUMENT_TOKEN_TO_BE_REPLACED

Soufflés are one of those culinary challenges that many cooks shy away from. Accounts of this impressive, but very delicate dish deflating as soon as it’s out of the oven have made it seem to be more trouble than it’s worth to prepare. Although definitely a little trickier than a southern classic like fried chicken, I found that with some patience and attention to detail, this French classic is very “do-able” and a great way to turn a regular dinner into something special. Not to mention that soufflés can be prepared as either a savory entrée or a sweet dessert.

END_OF_DOCUMENT_TOKEN_TO_BE_REPLACED

Pimento cheese is the southern snack.  As best as I can tell from my limited research, it does not exist above the Mason-Dixon, except in the homes of southern expatriates.  To those of us who were raised on it from an early age, it evokes thoughts of home, family, and everything that is right about being from the South.  To those who were deprived of this treat in their childhood, it’s just weird.  In other words, it’s an acquired taste.

END_OF_DOCUMENT_TOKEN_TO_BE_REPLACED 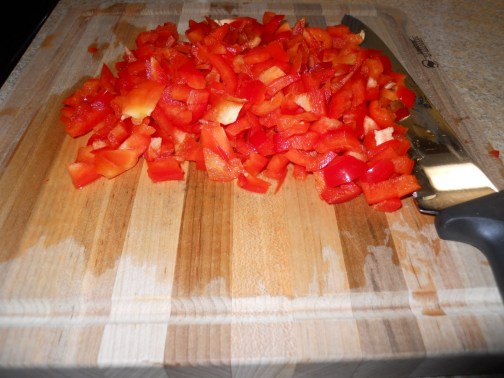 This dish was inspired by my mom’s sauteed veggies that she makes in the summer alongside angel hair pasta. She tosses lots of bright vegetables into a skillet with olive oil and cooks them until they are soft. I decided to bake my veggies and top them with a bit of crumbly light cracker.